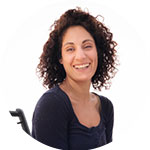 Rola Al Ashkar is a native of Lebanon. Through her position in Multicultural Ministry at Parkview Presbyterian Church, she has served the Presbytery of Sacramento through educating churches about Christianity and the challenges of ministry in the Middle East. She served the refugee community by providing services, organizing cultural events that connect Arabic speaking refugees to faith communities and engaging in ecumenical dialogues to empower Arab refugees.

Al Ashkar is Passionate about yoga, dancing, fitness, and the outdoors. She has a vision to create a Christian yoga community that is open to everyone, and especially the young adults, the “nones” and the “dones” in Sacramento, an area that is becoming more and more secular by the day, and to share Christ in a new way. 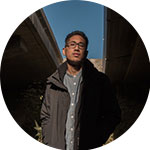 Christian Bustos is a Kapampangan-American, born and raised in San Francisco, California. He currently works as the Communications Director at First Presbyterian Church of Hayward in Castro Valley, California. He has been serving in this capacity since January 2018. Previously, Christian was working with an arts nonprofit based in San Francisco, California called Lyrical Opposition. He also serves as a spoken word poet and graphic designer. Christian is a San Francisco State University Alumni, where he received his Bachelor’s degree in Broadcast Electronic Communication Arts with an Emphasis in Business. He is currently a student in the commissioned lay pastor training program through the Presbytery of San Francisco. Last year, Christian started Lyrical Assembly, a nomadic community of artists who assemble to create social change through the integration of faith, arts and activism. 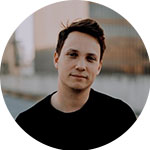 Zac Calvo is the organizing pastor of Coastland Commons, a New Worshipping Community of the Presbytery of Seattle gathering around the belief that creativity is at work in every person because God is endlessly and lovingly creative. Zac is a Seattle native who grew up in the Pentecostal tradition as a musician and youth leader before wandering into the Presbyterian fold after college. During his time in seminary he continued to develop a firm commitment to LGBTQ+ advocacy in the PC(USA), as well as an infinite pursuit of horror movies that actually scare him. As a part of the 1001 Cohort, he hopes to gain as much insight as possible from other pastors and leaders as he wonders about the future of the church. 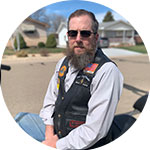 Chas. T. Carmichael is a Commissioned Pastor within the Presbytery of Pueblo serving a NWC, Greenhorn Ministries, in his hometown of Pueblo, Colorado. Chas. and his wife (Cindy) have been leading independent discipleship cores for several years which have come together to form this community. Chas. maintains an active role in the Presbytery serving on the CPM committee and is active the local NWC Cohort. Bi-vocational, Chas. works full-time as a Radio Technician while serving Greenhorn Ministries and a second year as a 1001 NWC Apprentice. Additionally, Chas. is the Chaplain for the local chapter of the Christian Motorcyclists Association. An avid outdoorsman, Chas can be found on his days off in the nearby mountains hunting, fishing, or camping with Cindy and their youngest daughter (Emma, 14). 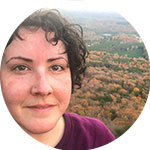 Kimmothy Cole is a spiritual leader, ritual artist and multi-disciplinary creator who develops community through a holistic, embodied lens. Their work is deeply rooted in mutual liberation, the dismantling of oppression, and folk process. Cole’s approach to leadership focuses on the capacity of each individual to work as collaborators and contributors whose unique voice is necessary to our collective flourishing. They view their role in leadership as facilitation, holding space for community encounters with the divine. 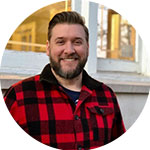 Aaron Coleman was born in Texas but has spent 39 of his 41 years in Arkansas, so he is pretty much an Arkansas native. He lives in Jonesboro with his 6-year-old daughter, Sally. Aaron has co-planted a fully affirming church in Northeast Arkansas called Solomon’s Porch. Aaron did not grow up in church, so every experience with this calling is brand new, challenging, and exciting. He hopes to earn from the collective wisdom of 1001 to better serve his community, and to grow into this new season of faith with others experiencing a similar journey. 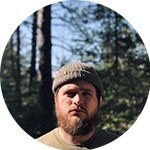 Brett Foote is the Pastor of United Presbyterian Church in Superior, Wisconsin. Prior to this, Brett served as pastor to a congregation in central Jersey and as a Student & Young Adult Ministries Director at a church near Lancaster, Pennsylvania. Brett is a graduate of Princeton Seminary. In 2012 he met his wife Laura while studying in northern Italy. She started Lopi Coffee, a specialty coffee business which plans to employ individuals affected by a disability and pay fair and sustainable wages. Out of Lopi, they are starting a new worshipping community primarily made up of and led by folks affected by a disability. Brett enjoys backpacking, lacrosse, New England IPAs, soccer, coffee, nordic skiing, Dungeons & Dragons, traveling, and spending time with their pug, Henri. 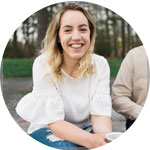 Laura Foote is a professional in the specialty coffee industry, interested in education, cultivating a community of belonging, and showing Christ’s love through an excellent cup of joe. Alongside coffee, Laura is passionate about disability. She has been instrumental in the starting of multiple contextual disability ministries, worked in group homes, special education classrooms, and most recently served as a research assistant studying joy and disability through Princeton Seminary and Yale Divinity. She is a graduate of the University of Northwestern and met her husband Brett studying in Italy. Through the starting of a specialty coffee business and a NWC they are merging their passions. Laura enjoys yoga, IPA’s, going for walks, and spending time with Henri their pug. 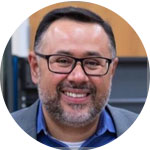 Lucas Fornel has served as a pastor for 3 years at the Brazilian Presbyterian Church in Maryland, supported by the National Capital Presbytery. He is married to Livia and has a daughter named Ana Luiza. He was pastor for 12 years in Brazil and received training and qualification from the CTPI (Church Planting Training Center) to plan and revitalize local communities. He was also pastor in Brazil and pastored a church that planted two new communities that are in full growth and development. The focus of his Maryland ministry has been to support young immigrant couples who have small children. The community he has led in Maryland is experiencing exponential growth and has more than 20 couples with children who are not yet 10 years old. In his hours of rest, Lucas loves to watch soccer games and do long walks outdoors. 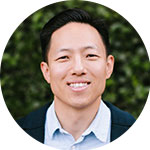 Al Han and his wife Becky started church planting as a modest house church from their home in Pasadena in November 2018. Prior to that, Al served as a youth pastor for ten years and a college & young adult pastor for six years. Becky is a full-time Creative Director and Graphic Designer having worked with well-known clients like BMW, Foursquare Church, Panda Express, Gensler Architects, and Belkin Electronics. Becky and Al knew that they were being called to church plant for a while, an open-minded and hospitable church that focused on the primary teachings of Jesus and did not worry too much about the secondary issues. However, Al was too scared to take the step of faith to church plant because he had only served in larger established churches; he was previously a youth pastor at a megachurch in Los Angeles and college & young adult pastor at a 100-year-old Methodist Church in Pasadena. But through a series of circumstances, God had led them to start a house church, which they and their Launch Team continue to meet as they prepare to launch publicly in Fall of 2020. While their path is paved with challenges and obstacles, they find joy and peace in their journey because they know they are where God wants them to be. Al continues to pastor their church plant as well as be involved with other church planting organizations like Cyclical, City-to-City, and 1001 NWC. You can find more info and content from their church at www.perch.church. 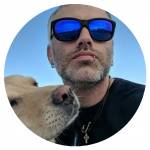 Charles Kelly was born and raised in Houston, TX. He did his undergrad in philosophy, and went to seminary at Union Presbyterian Seminary in Richmond, VA. He was ordained as a Teaching Elder in 2014, and served a small congregation in Las Animas, CO for four years before moving to Pueblo. Charles moved to Pueblo in the Spring of 2018. He lives in Pueblo with his wife and stepdaughter.
Since Moving to Pueblo, Charles has been working as the Associate Pastor of Young Adults and Youth at First Presbyterian Church of Pueblo as well as working part-time getting the Corinthian Bridge started, a new worshiping community based on service as an expression of discipleship. 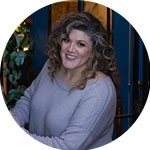 Pepa Paniagua is an ordained pastor serving in North Texas. Pepa is currently the Executive for Outreach and Education at St. Andrew’s Presbyterian Church in Dallas, and the founding pastor of kin•dom community-a multi-denominational/ecumenical new worshiping community dedicated to radical inclusion and transparent welcome, and sharing the good news of God’s love for ALL people. Pepa is looking forward to the Apprentice experience and hoping to gain wisdom from others on best practices to employ and pitfalls to avoid, she loves learning in community. A native Californian, Pepa is embracing life in Texas, but she misses the mountains and the sea every day. Pepa and her wife, Kelli, have three dogs who keep them on their toes, and constantly remind them why they can’t have nice things. 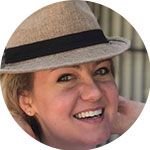 Ruth Schmidt earned her BA in Journalism from the University of Missouri-Kansas City and spent 10 years as a copywriter in advertising agencies while doing bi-vocational ministry church planting in KC. Through her work and ministry, she has come to believe that storytelling is the primary vehicle for connecting with people. Ruth is a Co-Director of Reel Spirituality at Fuller Theological Seminary and is working on her MDiv in Culture and the Arts. She is currently taking steps to be ordained in the PCUSA by becoming an Inquirer. Connect with her on Twitter @ruthschmidt. 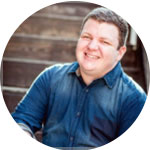 Elijah Walker is the founding pastor at Solomon’s Porch, a new faith community currently forming in Jonesboro, AR. Solomon’s Porch is Christ centered, Spirit led, and LGBTQ+ affirming. Previously, Elijah served as a Pastoral Fellow at West Hills Friends Church in Portland, OR and helped form a worship group for people who have experienced religious based trauma. Elijah is part of the Jesus People Network, which is a community of pastors and churches that work toward the inclusion of LGBTQ+ people in the Body of Christ. In his free time, Elijah enjoys playing guitar, baking cinnamon rolls, and cuddling with his Pitbull named Harrison.