Immigrants, who are over-represented in low-paying and dangerous jobs, are being targeted in many places around the country. In this case, ICE violently raided a workplace in east Tennessee. The workers are pushing back with a lawsuit against ICE, the first of its kind.

Our grantee partner, Tennessee Immigrant and Refugee Rights Coalition, is supporting the workers. Read their update below, learn more, and get engaged via the PC(USA) Office of Immigration Issues 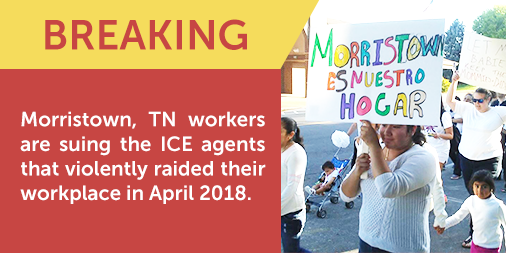 I wanted to make sure you saw the news –  history was made last week in East Tennessee.

Workers from the Southeastern Provision meat-processing plant in East Tennessee are suing the ICE agents who violently detained them in a militaristic worksite raid last April. This is the first lawsuit challenging a worksite immigration raid in the Trump administration.

When federal agents stormed into a meat-processing plant in Bean Station, Tennessee on April 5, several workers had guns pointed at them, others were pushed to the ground, and one of the plaintiffs was punched in the face – all while helicopters were circling overhead and the plant was surrounded by agents with automatic weapons drawn. Around 100 workers were rounded up and filed into buses that day; dozens would be shipped off to far away jails and detention centers without the opportunity to say goodbye to their children or spouses.

Now, seven courageous workers who were detained that day are standing up against this brutal treatment and filing a lawsuit to get justice for themselves and their coworkers. Isabel, Geronimo, Carolina, Luis, Martha, Catarino, and Maria are being represented by our partners at the National Immigration Law Center, the Southern Poverty Law Center, and the law firm of Sherrard, Roe, Voigt, and Harbison. The attorneys filed a class action lawsuit that seeks to represent approximately 100 individuals who were subjected to this violent, militarized worksite immigration raid. Read our joint press release and find a copy of the complaint here.

The complaint from the legal team addresses the brutality the workers faced at the hands of agents that day, but the human costs of this unconscionable abuse of power extend much further. I was in Morristown on the day of the raid, and in the weeks that followed. When a raid of this scale happens in our communities, it’s like a bomb goes off. As the tragedy and chaos unfolded on that day, it was a painful reminder of why the government stopped using this egregious enforcement tactic almost a decade before.

ICE raids cause deep psychological and physical trauma for workers, their families, and their communities. This type of militaristic raid tactic in particular, in which agents use unnecessary force to detain workers at their jobs unexpectedly, leads to serious mental, emotional, and physical health complications that cause suffering for years to come. Today, nearly one year after the raid in Bean Station, this trauma and tragedy continue to unfold.

It seems that the Trump administration is choosing rural communities like Bean Station – places where legal and advocacy services may be scarce – to carry out mass worksite raids and other brutal enforcement tactics in hopes of disappearing people without backlash. They were wrong.

This raid, executed by a federal agency with little accountability, has devastated many families, but the community has come together to pick up the pieces. The physical and mental pain caused by the raid has still not healed in the Morristown area, but this complaint seeks to bring some measure of justice for the workers whose rights were violated and some level of accountability for those who carried out this violent raid.

We’ll keep you updated on this case as it progresses through the courts and with other ways you can stand with the community in East Tennessee as they recover from the raid and fight for their families.

With hope for justice,

Bean Station In the Media