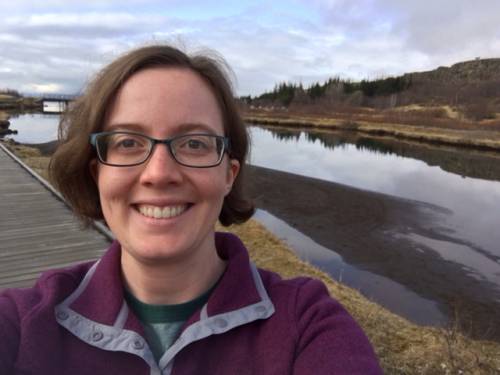 As an adventurous eater I was really excited to see what kind of trouble I could get myself into when in Iceland.

A good friend from grade school moved to Iceland a few years ago for grad school and as I like to say “Life happened.” He was going to school when he met his partner, who has since become his husband. He and his husband, a native Icelander, have started roots in a town outside of Reykjavik called Hafnarfjörður. With friends to show me a truer version of Iceland I set off full of excitement and wonder.

I told my friend that I was interested in trying traditional Icelandic fare–with very few reservations. I suppose there could have been something I wasn’t willing to try but I eat by the motto “I’ll try anything once.” Luckily my friend is a rather adventurous person and made the commitment to try anything I wanted to try.

What I discovered is traditional Icelandic food is a food of necessity. Many traditional foods are those of farmers and sheep herders surviving Iceland before refrigeration, grocery stores, and industrialization. A common theme was food out of struggle. As one can imagine, Iceland is somewhat desolate as far as edible native vegetation and crops can struggle to survive. Sheep herding used to be an enormous industry on the island nation. It’s not as popular now but you can see its imprint in the culture, and of course, the food.

Sheep meat is available but no longer the staple it once was. Unless you’re a tourist. Sheep’s head has gone from farmstead cooking to tourist trap. One of the few remaining places that still serves sheep head, svið, is the bus terminal in Reykjavik. Yes, its ok if your stomach just turned. The idea of eating a sheep head… at a bus terminal… took some adjusting to but when we arrived I was surprised at the cleanliness of the cafeteria and knowledgeable staff.

Clunk. The plate hit the table and there it was. A sheep head.

Cut in half so that you get a profile. There’s no dressing it up; not disguising it. You have to hand it to Icelanders–they don’t hide the reality of what’s on the plate by covering it flowers, greens, or other adornments. It came with rounded mounds of puréed squash and mashed potatoes.

I have a picture but I’ll spare you. No, on other hand… 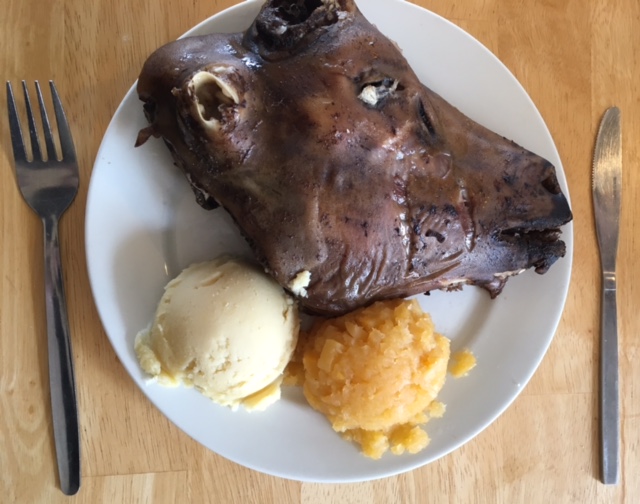 We took the first bite with a hint of unease. Guess what? It wasn’t bad. Really. It reminded me of a gamier pot roast in a way. Truthfully I can’t tell you enjoyed the dish itself but I did enjoy the experience. That’s what it’s about, isn’t it?

Enjoying the experience was paramount to my trip.

For my last night my friends took me out to a steak house in town. Again, with the pleasure of the experience guide me, I chose new foods. Sure you could get the usual beef steak but Iceland is famous for its lamb and seafood so I went all in. I got a lamb appetizer and it was delicious! I’m not a lamb fan but I’d order that again without hesitation. For the entrees I got horse, my friend got minke whale, and his husband got lamb. We sampled each other’s and they were all delightful! I know horse and whale meat is rather controversial but I researched both industries. Despite being meat industries, restrictions do apply and it’s not a free for all. Icelanders seem to be keen on keeping tradition alive while taking care of modern concerns for animal welfare and the environment.

I left Iceland with one thing left on my “to try” list. I unfortunately did not have the opportunity to try one very unique food. Fermented shark, hákarl, is the one dish I was oddly excited to try yet ironically didn’t. Hákarl is fermented under some sand and rocks to eliminate the liquid and then hung in a shed for a few months. You’ll be first in line to try it, I know. 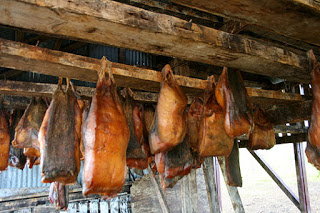 I’ve been told it smells like the feet of someone who has been in a dumpster but I was so curious that it wouldn’t have deterred me. Of course I can comfortably say that since I didn’t get the opportunity to try it. I’m hopeful my attitude will be the same when face to face with it. It’s still on my “to try” list.

Is traditional Icelandic food one of a kind? Yes. Could it be hard to digest based on taste, ethics, environmental concerns? Yes. However, it is the food of a people- a strong, reserved, lovely people- and I wanted to experience whatever it brought my way. Food is a great look into a culture. I’m curious person by nature and Iceland taught me that you can discover fantastic food if you follow your curiosity.