THE BRIGHT LIGHT OF JOHN KINSMAN 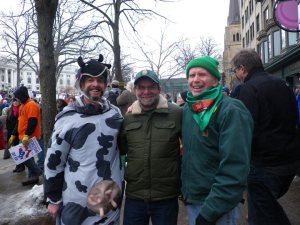 Rally at the 2011 Pull Together Solidarity Tractorcade, Wisconsin State Capitol. The event drew over 150,000 people -the  largest gathering ever in WI history. John Peck on left, John Kinsman on right with another farmer in the middle.

The physical life of John Kinsman has ended, but he lives fiercely in the hearts and minds of the myriad people he touched and his many close friends.

Wisconsin dairy farmer, a dear friend to many, a tireless warrior for food sovereignty, and a champion of family farmers in his home town and literally around the world. While continuing to run his dairy farm, John traveled around the US and the globe showing up wherever people needed to hear about the plight of family farmers, how they needed a fair price, and the need to turn upside down exploitative trade and farm policies. Even as he began to decline he would be out with the masses, marching with the Coalition of Immokalee Workers and speaking in front of crowds.

This quote gives you a sense of John’s unique humor and colorful stories, “Organizing farmers is like pushing a wheelbarrow of frogs.”

John lived life with abundance, fought for justice, laughed with friends and enemies, inspired me and so many others, and will be sorely missed!

“John Kinsman, a dairy farmer and loving husband and father from the hilly Driftless region of Wisconsin was an unlikely and unassuming giant in the global struggle for justice and food sovereignty. But a giant he was, touching the lives of countless people around the world in his 87 years of farming, protesting, strategizing and building relationships and solidarity.John died peacefully yesterday at 87, on Martin Luther King, Jr., Day, surrounded by family on his farm.”

Read the “In Memory of John Kinsman,” by Siena Chrisman on the WhyHunger blog.

From his dear friend, John Peck

John Kinsman passed away earlier this afternoon at his family’s farm.

I was actually able to visit him yesterday and talked to him a bit. Though he was not able to respond, he could certainly understand and even laughed at one point.  He also appreciated all the cards that folks have been sending to him and which his family read to him.

John has literally touched the lives of thousands of people as a grassroots pioneer of organic sustainable agriculture and globe trotting advocate of food sovereignty for decades.

As Bright As Venus at Dawn
In memory of John Kinsman
(just passed away on MLK day, Jan. 20, 2014, leaving a hole in the world…)

If a human´s body can share and channel
the Energy of the Land
and all life that dwells in the land
and then radiate outward that energy
in every gesture, deed and word
imprinted with a bit of the unique person that body carries

If a human´s body can live in fellowship
with men and women from every corner of our Planet
and laugh and sing and dance and embrace and march
and protest, and picket, and bear witness, and organize,
and grieve for everyone lost on the way…

If a human´s body is as open and sharing to others
as the land is to a cow and its calf frolicking upon the grass
building a community of friendship and a search for justice
sifting through the lies of a poisoned age
and raising up all people of good will, rejoicing in their particular
gifts and their diverse ages, shapes, colors,
genders, temperaments, foibles

Then one such body, shining as brightly as Venus at dawn
was John Kinsman´s
laughing as joyously as the patriarch of a prodigious autumn hunt
welcoming all to his hearth
and into his heart…

We will miss that tender, lithe and heroic body
and the laughing love he spread around our broken world
spread like rich manure destined to become one day,
with the help of cherished bovine relatives and rich pasture…
delectable cheese
We will miss him, we will miss him all
when gazing at Venus at dawn and smelling pine trees in January
tears of gratitude falling in the snow…

I know many of us were sad to hear the news of John Kinsman’s passing yesterday – he was such a ray of sunshine in the struggle for food sovereignty, and we will miss him deeply!  We are so grateful for the life he led – and what a blessing it was to have him with us at our last USFSA Membership Assembly last march, sharing his insights as part of the opening fishbowl on food sovereignty, sharing his stories around the campfire, and sharing his smile and laughter with all of us throughout the whole time.  I know his energy and spirit will continue to be a light for us as we continue in this struggle.

For those who have not yet seen it, John Peck and our friends at Family Farm Defenders have put together a moving compilation of information, links to videos, booklets, and interviews with John Kinsman – see more on their website here: http://familyfarmers.org/?p=1065

Grassroots International also posted this short blog in tribute to him.

John’s involvement in national and international work vs. GMOs was always exemplary, and he offered a unique ray of light whenever the course of the struggle got murky. John drew on his experiences going back to the civil rights movement, adding a vast amount of wisdom and inspiration to everything he was engaged in. He’ll be missed by people everywhere who are working for the integrity of our food and our communities!– Brian Tokar, Institute for Social Ecology, Vermont