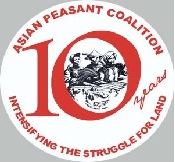 Land Grabbing is turning World Food Day into World Hunger Day for millions. See the Press Release below from the Asian Peasants Coalition. And speaking of peasants – which in most places around the world doesn’t have a negative connotation as it does with some in the U.S. – the Korean Women’s Peasant Association has won the 2012 World Sovereignty Prize and will be celebrated in New York City, along with other honorees including the Coalition of Immokalee Workers, who just won an agreement with Chipotle as part of their Campaign for Fair Food!

October 10 at 7:00 pm. You can attend in person or watch the live stream. Details here…

Press Release
October 5, 2012
Asian Peasants to Declare “World Hunger Day”
On the Occasion of the World Food Day on October 16

The Asian Peasant Coalition (APC) and its members will organize simultaneous actions on the occasion of the UN FAOs World Food Day on  October 16, to highlight landlessness and chronic hunger.

The FAO said their official theme on October 16 is “Agricultural cooperatives – key to feeding the world. It says, it has been chosen to highlight the role of cooperatives in improving food security and contributing to the eradication of hunger. In addition,  FAO and the European Bank for Reconstruction and Development (EBRD) calls on agribusiness to step up investment from Central Asia to North Africa.  Furthermore, the two organizations called on governments to create an enabling policy environment that fosters private-sector investment.

“We condemn FAO and ERBDs statement. This is a continuation of what was engineered during the Rio+20 Summit last June 2012 in Brazil. Under the Public Private Partnership (PPP) scheme, both domestic and foreign investors, will be given legal authority to make it easy for them to further intensify land grabbing, to multiply plunder of available resources and step-up corporate takeovers of other vital sections of the economy,” stated Rahmat Ajiguna, APC deputy secretary general and concurrent secretary general of the Aliansi Gerakan Reforma Agraria (AGRA) based in Indonesia.

“Meanwhile, international NGO GRAIN has recorded 400 cases of large-scale agricultural investments all over the world while 38 cases is in Asia (excluding Philippines-China deals which was suspended) . Nearly 2 million hectares of land in Asia (particularly in Burma, Cambodia, Laos, China, Timor Leste, Indonesia and the Philippines) have been subjected to these investments since 2006. It has resulted in increased landlessness, displacement of people, violations of human rights and degradation of natural resources, thereby further worsening poverty and hunger among small food producers<” remarked Zenaida Soriano, APC  Southeast Asia Coordinator and also the President of the National Federation of Peasant Women (AMIHAN) in the Philippines.

Ajiguna added that, “In Indonesia, there is unceasing expansion of  palm oil  plantations in Jambi province. It invaded our forest and rice producing areas. There were around 259 permits palm oil  plantations covering more than 1.3 million hectares and about 980, 000 hectares have been planted (Provincial Disbun 2010).  In 9 villages in Mersam District in Batang Hari, 7,800 hectares of rice lands will be converted into palm oil. Palm oil plantation threatens rice self-sufficiency  program of the government and Indonesian people would end up seriously hungry.

Soriano revealed that, “In Southeast Asia, 87 million people in Indonesia are food-insecure, of which 25 million are severely hungry. In the Philippines, one out every four Filipinos suffers from hunger.  Of the 103.7 million Filipinos, 25 million are hungry. Worst, the floods, droughts, earthquakes and other natural disasters as well as state repression cause widespread destruction and force them to abandon their homes and farms.”

Ajiguna and Soriano announced that,  “On October 16, the APC will declare ‘World Hunger Day’ on the occasion of the World Food Day 2012. We will do this to emphasize the real situation that the rural people are landless. That landlessness is worsening by large-scale land grabbing of local and foreign investors in agriculture which aggravates chronic hunger experience by the rural poor. Unfortunately, the world’s food producers are the most food-insecure and hungry people..Having no land to till makes them more vulnerable of hunger. Many of them, are seasonal farm workers.

On  October 16, the APC will simultaneously organize different activities across Asia.  In the Philippines, the Kilusang Magbubukid ng Pilipinas (KMP) will lead a protest in front of the Department of Agriculture.  A peasant caravan against land grabbing in the City of San Jose del Monte in Bulacan will follow on October 17-18 and will culminate on October 19. In Sri Lanka, the Movement for National Land and Agricultural Reform (MONLAR)  will organize week of action in many parts of the country. In Nepal,  different events in 45 districts will be organized by All Nepal  Peasants Federation ( ANPFa).  The Andhra Pradesh Vyavasaya Vruthidarula Union (APVVU) in India will organize simultaneous demonstration opposing land grabbing in 10 districts of Andhra Pradesh while a People’s Biodiversity Camp will be held in Hyderabad.  Similar actions will be held in Indonesia, and Pakistan.”

“We demand for a genuine agrarian reform and food sovereignty to resolve chronic hunger. The victory of the Isabela farmers and its people against Itochu (Japan)s  bioethanol plant is a concrete example. They were able to shut down the bioethanol plant. And they are now planting rice and corn in more than 1,000 hectares of land they reclaimed from EcoFuel. Meanwhile, the AGRA, together with other farmers groups  in Indonesia, led thousands of peasants on January 2012,  and mobilized in front of the Presidential Palace and Parliament, resulting to a special legislative committee to address agrarian conflict….  These actions are peasant-led and directly benefitted the local peasant communities. Let us continuously reclaim lands that have been grabbed and plant it with food crops,” Ajiguna and Soriano ended.