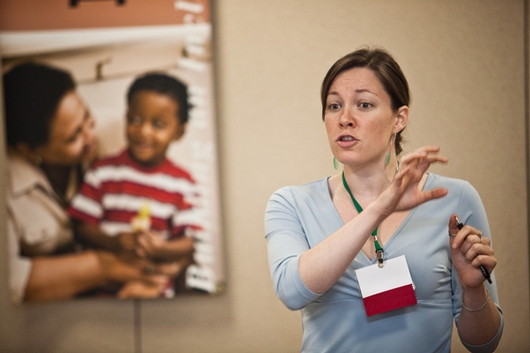 Steph Larsen is on staff at the Center for Rural Affairs. Here she is leading a workshop at the National Rural Assembly in St. Paul, MN

“Under current law, if one big corporation farmed the entire country, the U.S. Department of Agriculture would pay 60 percent of its insurance premiums on every acre.”

Sounds crazy, right? Yet this is reality and illustrates the way our food and farm policies give a hand up to the largest farms, while small-scale family farmers are largely neglected.  The article below (excerpted) from our partner, Center for Rural Affairs, points to the kinds of changes needed in the 2012 Farm Bill (yes, it should be called the Food and Farm Bill). Read what is important to our neighbors in rural areas of the country.

The Farm Bill should start by capping unlimited payments and crop insurance subsidies paid to the largest farms in the country, and prioritize beginning farmers and ranchers with the Beginning Farmer and Rancher Opportunity Act.

As we reported in December, the Farm Bill proposal developed for the budget-cutting committee died when the committee failed to reach agreement on larger budget legislation. The proposal was deeply flawed, so that was a fitting end.

We now expect a more customary Farm Bill debate to begin early next year. That provides an opportunity to rally our voices for a bill that reflects the values of rural America and strengthens, rather than weakens, our communities.

We believe the Farm Bill must cap unlimited payments that subsidize the nation’s largest farms to drive smaller operations out of business. That starts with closing loopholes in traditional commodity programs. The bill should also go further and cap federal crop and revenue insurance subsidies to mega farms.

Under current law, if one big corporation farmed the entire country, the U.S. Department of Agriculture would pay 60 percent of its insurance premiums on every acre. We don’t believe it is the federal government’s role to cover 60 percent of the premium for every acre of the largest farms and richest landowners, especially in the midst of record high farm income and record federal deficits.

It should also prioritize beginning farmers and ranchers by including the Beginning Farmer and Rancher Opportunity Act. Improving and appropriately funding the Conservation Stewardship Program, which rewards farmers who practice environmental stewardship year round, should also be included.

Join us to make your voice heard and demand a Farm Bill that reflects the best of rural America. Together we can fix the Farm Bill!

Feel free also to contact Andrew Kang Bartlett andrew.kangbartlett (at) pcusa.org if you are interested in working on the Food and Farm Bill or other food justice-related issues.