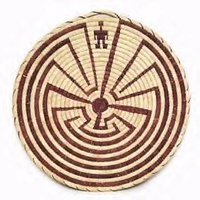 This morning, Ginger Martin, entered the hall to the chanting of an elder along with 20 women holding woven plates like suns shining on the first day of the world. Small boys with antler-like sticks brought up the rear. The Pima leader welcomed the 550 of us gathered from all parts of the U.S. to this Food and Society Conference and talked about their victory in gaining control of the precious water of the Gila River which had been damned and stolen away over the decades. The Pima/Maricopa people had gained “ownership” of 52% of the water in Arizona through a recent ruling. Now, they were planning a resurrection of a proud and prolific farming culture.

Ginger mentioned the amazing development of four varieties of 60-day (not 90-day) corn that the Pima/Maricopa people had bred over time, and spoke of the tepary beans that represent the stars in the heavens. These traditional foods are part of the solution to dealing with the rampant diabetes that is found among the Pima ever since food rations were brought in and the diet shifted. The Pima/Maricop face great challenges, but they are full of hope and ambitious plans for a healthy farming future for their people.

Following are the two last reasons why organic, not GMOs, will feed the world.

Seeds are not simply a source of food; they are living testimony to
more than 10,000 years of agricultural domestication. Tragically,
however, they are a resource that has suffered unprecedented neglect.
The UN FAO estimates that 75 per cent of the genetic diversity of
agricultural crops has been lost over the past 100 years.36

Traditionally, farming communities have saved seeds year-on-year,
both in order to save costs and to trade with their neighbours. As a
result, seed varieties evolved in response to local climatic and
seasonal conditions, leading to a wide variety of fruiting times, seed
size, appearance and flavour. More importantly, this meant a constant
updating process for the seed’s genetic resistance to changing climatic
conditions, new pests and diseases.