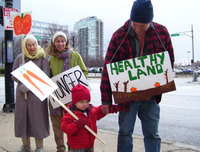 The McConnell rally on Wednesday was a great success!

We had a spirited protest with drumming and street theater. Rumor has it that the Academy is looking for video footage for next year’s awards. Coverage of the rally aired Wednesday on the six o’clock news on at least one TV station, WAVE 3, and has also been covered several times by WFPL 89.3 Wednesday and Thursday morning.

For those of you that could not make it, you missed a great show! Street theater, colorful signs, marching, chanting, and drumming kept us warm despite the 10 degree wind chill!
Six protesters were invited to go up to McConnell’s office to speak with Larry Cox, his senior aid, who listened to our concerns. Cox received a letter to the senator stating our  requests to fully fund nutrition and conservation programs, establish commodity subsidy payment caps and help secure mandatory funding for minority farmers.

Other photos are available on Andrew’s Flick site for now, and will be up on the PCUSA Better Farm Bill site soon. Please stay tuned to Better Farm Bill and this blog for updates and possible action alerts.

The Presbyterian News Service carried the story of the rally on Tuesday.