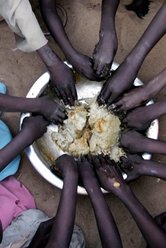 If you are like me and have done a bit of reading about genetic engineering in agriculture, you are suspicious of the hype about the potential of GMOs for feeding the world. So far, commercial use of GMOs’ greatest success has been singular: Monsanto has been able to sell and apply ever increasing amounts of the Round Up pesticide. Other concerns about anti-trust violations have compelled the Black Farmers Association to call for a boycott of Monsanto. And the Organic Consumers Association is campaigning furiously against the company.

Many suspect that the genetic contamination of crops by GMO crops is not accidental but is a deliberate strategy. This Associated Press article may lend credence to the theory –

ST. LOUIS — Federal regulators could not determine how an experimental strain of biotech rice ended up in the commercial food supply, but an investigation suggests it escaped from a university research laboratory.

A yearlong U.S. Department of Agriculture investigation found that the genetically engineered rice, which was not approved for human consumption, was grown at a corporate-funded laboratory at Louisiana State University alongside commercial strains of rice that were eventually contaminated in the food supply, according to a report released Friday.

It was difficult to determine exactly how the rice escaped in part because researchers sponsored by Bayer CropScience AG did not keep documents like maps or cleaning records, said Cindy Smith, administrator of the Agriculture Department’s Animal and Plant Health Inspection Service that regulates biotech crop testing.

"One of the fundamental challenges for us is that we were trying to go back in history and recreate what was happening in field tests in 1999, 2000 and 2001,"
Smith said.