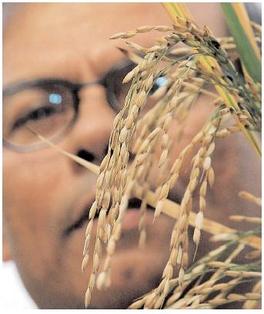 I highlighted the dangerous effects of additives on kids below. Now, it looks like Budweiser is experimenting with unwanted additives in a favorite adult (usually) beverage!

WASHINGTON – October 8 – Greenpeace released the results of analyses
showing the presence of an experimental genetically engineered (GE)
strain of rice at an Anheuser-Busch operated mill in Arkansas that is
used to brew Budweiser.

An independent laboratory test, commissioned by
Greenpeace, detected the presence of GE rice (Bayer LL601) in three out
of four samples taken at the mill.
Bayer LL601 rice was the source of the 2006 contamination of at least
30 percent of rice stocks in the United States. The GE contamination
had a massive negative economic impact on the U.S. rice industry as
many countries subsequently stopped or significantly restricted the
import of U.S. rice.

"Anheuser-Busch must make a clear statement about the level of GE
contamination of the rice used to brew Budweiser in the U.S. and spell
out what measures are in place to ensure this beer does not reach the
company’s export markets,” said Doreen Stabinsky, Greenpeace
agriculture campaigner.