On Thursday, January 16th, the Committee on Mission Responsibility Through Investment (MRTI) approved recommendations for companies to be added to the General Assembly Divestment/ Proscription list (2020 list here). These recommendations included in MRTI’s report to the 224th General Assembly, are pending review and approval by the Presbyterian Mission Agency Board at it’s upcoming meeting in February. Read more in the recent PNS story here:

In response to referral 08-08 from the 223rd General Assembly (GA), MRTI attempted to arrange dialogues with the nine companies identified. MRTI sent letters to these companies in August and September 2018 informing them of the GA Directive. Every company except Marathon Petroleum responded to MRTI’s requests and held a dialogue to discuss the GA Directive and the company’s activities related to climate change. From 2018 to 2020, MRTI participated in 31 dialogues with the nine companies named by the GA and used the Guideline Metrics to score each company. MRTI recommends the three lowest scoring companies, ExxonMobil (Exxon), Marathon Petroleum (Marathon), and Valero Energy (Valero), be added to the GA Divestment/ Proscription list.

We’ll be sharing more information in the coming months about how MRTI came to this decision and what it might mean for future work. For now, we’d like to dive more into MRTI’s process of engagement and divestment.

MRTI’s engagement process with any company begins with GA policy or directive. The vast majority (over 80 percent) of MRTI’s corporate engagements since 2016 have been explicitly about environmental and climate change issues, due to the directive from the 223rd General Assembly (2018).

Once MRTI identifies its priorities and workplan, based on the GA directives, the committee collaborates with large investor coalitions who are doing similar work such as the Interfaith Center on Corporate Responsibility and Ceres. MRTI researches companies, corresponds with them, usually via a letter, asking for a dialogue and laying interest areas. Ideally, this letter would lead to a dialogue with the company. If the company fails to respond or agree to a dialogue, MRTI then files a shareholder resolution. This process can go back and repeat itself each year – often going from research to correspondence to dialogue and back again depending on MRTI’s goals for each company.

This can be a slow and time-consuming process, but it’s necessary to engage the company and ultimately reach a point where companies are either moving or not, where changes happens or doesn’t happen.  If it is clear that the company will not move despite MRTI’s efforts, the committee would recommend that company be added to the GA Divestment/ Proscription list, as is happening now.

Now that MRTI has recommended adding ExxonMobil, Marathon Petroleum, and Valero Energy to the GA Divestment/ Proscription list, the new recommendations must be approved first by the Presbyterian Mission Agency Board, then by the GA. Once approved, MRTI finalizes the list according to GA policy and sends it to the boards of the Board of Pensions and the Foundation for consideration.   Each investing agency has its own implementation process, and they can either approve the GA Divestment/Proscription List in full or in part. In following years, MRTI staff research companies for GA policy compliance. If companies are still out of compliance, they will remain on the Divestment/Proscription list. However, if there is reason to believe a company has changed favorably, staff will monitor, verify and recommend to the PMAB/ GA the company be removed from the list.

MRTI will continue to report to the General Assembly. Future MRTI recommendations may include additional companies to be added to the “focused engagement list” per the environmental policy, or to the Divestment/Proscription List for failing to move adequately towards compliance with GA criteria. Ideally, the companies that are either on the “focused engagement list” or the Divestment/Proscription List will change their policies and procedures to manage their operations towards a low-carbon demand future. 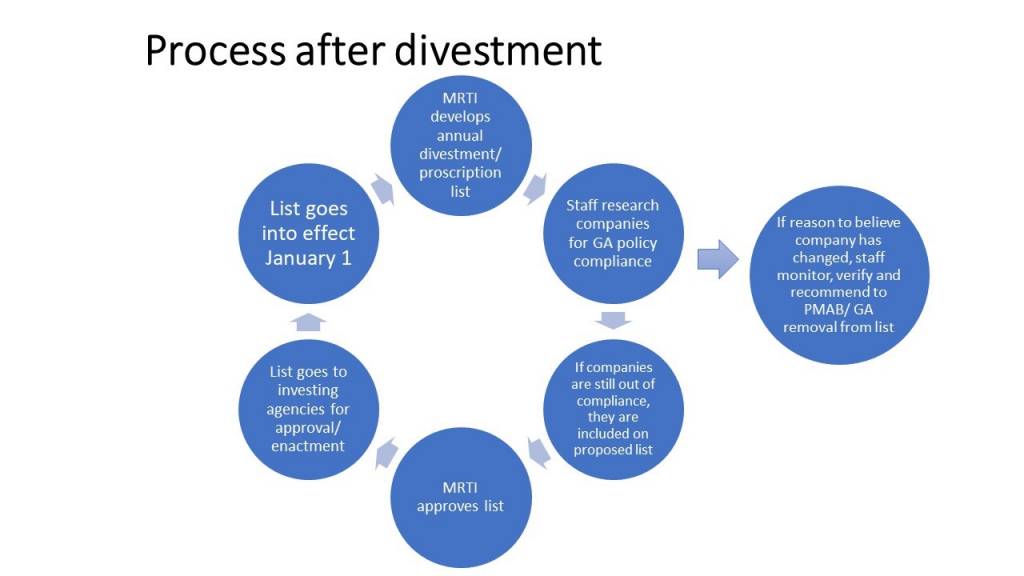