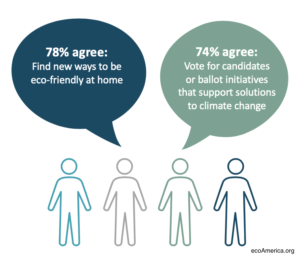 Last month, the United Nations’ Intergovernmental Panel on Climate Change (IPCC) released their special report outlining the consequence of a changing climate, and the measures necessary to avert the most dangerous scenarios. The report is a collaborative effort of 91 authors, more than 150 contributors, and includes over 42,000 expert and government comments. It represents the most up to date consensus on climate change by the world’s scientists.

But the response to the report by many elected and government officials, including the President, cast doubt on the findings of the report, and the expertise of its authors. With a report that clearly spells out the consequences of climate breakdown, and with an outspoken skeptical Administration, how are Americans responding to the IPCC report? Do they trust the findings? Does partisanship shape their response? And does the report inspire Americans to act on or prioritize climate solutions?

To find out the answers to these questions, ecoAmerica conducted its November 2018 American Climate Perspective Survey. These are the four key takeaways:

While most Americans trust the special report from the Intergovernmental Panel on Climate Change, the findings indicate that, regardless of whether they have more less trust in the report, they are concerned about climate change, are ready to act, and think climate solutions should be a top priority in the U.S.

To help Americans act on climate in their own community, ecoAmerica offers programs, tools and resources across a spectrum of specialites. Check out the new websites for Climate for Health, Blessed Tomorrow, and Path to Positive Communities to access resources and learn the best ways to engage on climate. Stay up to date on how to talk about climate by following ecoAmerica’s Talking Points Series.

To see the full details of the survey, click HERE.