About May of 2008 I received a call from Deb Carroll, a former teaching colleague of mine, and an organizing member of the Twin Ports Interfaith Global Warming Initiative (TPIGWI).

Deb was wishing there was a greater response to the 200 invitations sent to Duluth, MN I Superior, WI area churches. There was not a single response from any Superior area Congregation. So I asked for and was granted permission to represent UPC at the first meeting.

Once there, I discovered a recommendation from the General Assembly of the Presbyterian Church USA urging congregations to take seriously the restoration of God’s creation, and to reduce their carbon footprints. We were charged that day to do something concrete, sustainable, and measurable. Inaddition, we were to keep records and return next year with a report on our progress.

Since gas was almost $4 per gallon at that time, I chose as UPC’s goal: to voluntarily reduce the number of miles we drive. It seemed every age group could participate if they were interested. As examples:

We kicked off our Carbon Cutting Congregation project with a presentation during the “Minute for Mission” segment during Sunday worship. Then offered slips like the sample below in the Sunday bulletin , monthly newsletter , and on a table in the back of church.

Some sample slips that came in were: “Walking to church, .5 mi. round trip”, and “biking to church, 2 mi., round trip”. The Sclunitt family, a soccer family, organized a 7 family car pool to a tournament in Hibbing and saved several hundred miles in one event.

On Sunday mornings, churchgoers document their carbon cutting contributions on them and drop them in the offering plate. Later the trustees give me the slips and I compile cumulative totals for each category as well as our overall carbon cutting, in tons. This is displayed on an A-frame in the back of church. It’s great fun to see the numbers rise. It’s like watching the red column on the United Way fund raising thermometer climb. To date we’ve had 39 people participate.

Beyond those 39, many others have said, “You know, I do that but I just don’t write it down and turn it in.” To which I respond, “That’s wonderful, that means our total is just the tip of a very big iceberg. The important thing is that you are doing something, and besides, God knows how much carbon you’ve saved!”

The new church secretary, Trac Rasmus, (and her current successor, Leah Robertson) have been very creative in conserving their use of copy paper in the design of bulletins and newsletters .

And just recently several groups have reported that they voluntarily avoided using Styrofoam cups for fellowship events to save on petroleum use and landfill longevity. (We don’t currently have conversion estimates for how much carbon is saved by these last three actions.)

To keep awareness up in the congregation, we have occasional articles in our monthly newsletter featuring guest editorialists, environmental tips from other sources, and new ideas from within the congregation.

We also use the “minute for mission” time during worship for an occasional update or guest speaker such as a local TV Meteorologist. (Shannon Murphy spoke before she moved on to a new market.)

Finally, we try to recycle at the church just as much as we do at home. We have four bins. One in the office, one in the choir area, and the other two are in the kitchen for plastics, glass, tin cans, and clean cardboard. Our church has now contracted for curbside pickup. If there is too much for our bin I just make a trip to 1021 Garfield Av. where AA Rolloff has a drop off-site for Hartel Recycling which now has the Superior Residential Curbside Recycling account. 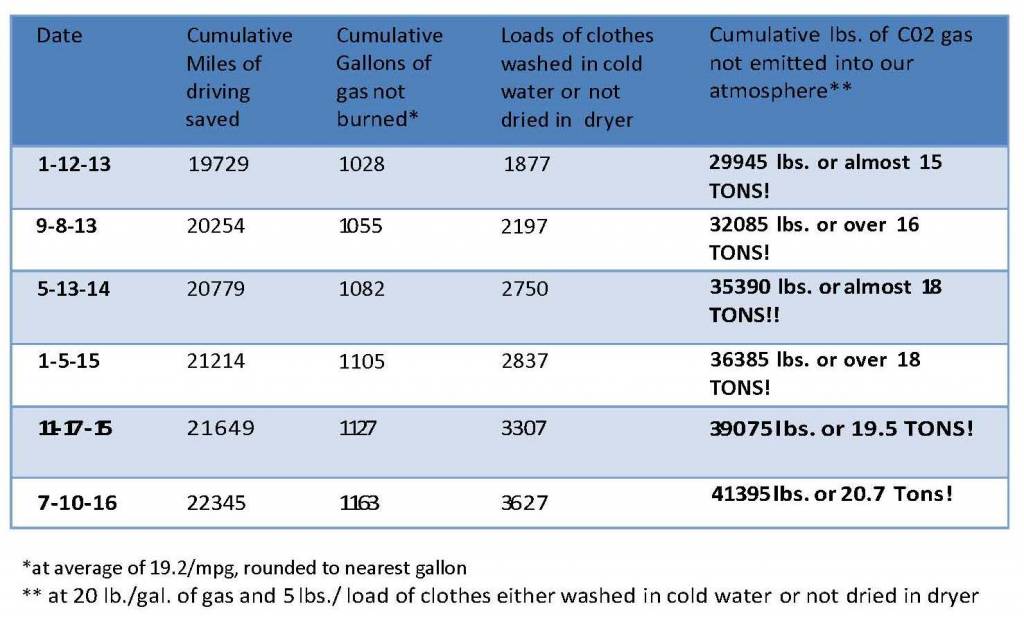