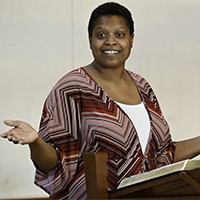 The Rev. Denise Anderson has just been named interim director of the Presbyterian Church (U.S.A.)’s Racial Equity & Women’s Intercultural Ministries. She has also served the church as coordinator of the Office of Racial & Intercultural Justice Ministries, co-moderator of the 222nd General Assembly, and as the pastor of Unity Presbyterian Church in Temple Hills, Maryland. A native of Hampton, Virginia, Denise is a proud graduate of the Howard University Divinity School. 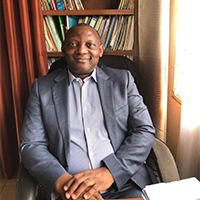 Samuel Nguiffo was born in the highlands of western Cameroon (a country which has probably hosted the Babel tower, with its 250 different tribes) some few years after his country’s independence. He studied law and political science at the university in Yaounde, and served as a diplomat in the ministry of foreign affairs in Cameroon.

Nguiffo founded the Center for Environment and Development (CED), the oldest and most reputed native environmental NGO in the Congo Basin, active on nexus natural resources management – politics, and trying to protect the environment and communities’ rights. Building capacities of locally grounded institutions, training the next generation of experts and activists is one of CED’s priorities. 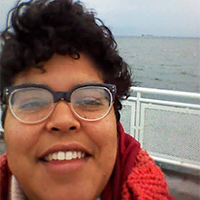 Lauren Sanders, who is Black, Kickapoo, and an enrolled member of the Prairie Band Potawatomi Nation of Kansas, facilitates workshops about trauma-informed theology, working with Indigenous communities in healthcare, and dismantling racism and colonization. She is the Indigenous Spiritual Care Chaplain at First United Church Community Ministry Society. She recently finished her Master of Theology degree at Vancouver School of Theology, and her thesis project was “Spiritual Numbness: Indigenous Teachings for Indigenous Ministers.” Lauren is seeking ordination in Heartland Presbytery. 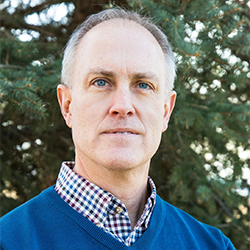 Mark Douglas is an ethicist and professor of Christian Ethics at Columbia Theological Seminary, and also the director of the Master of Divinity Program. Douglas received his PhD from the University of Virginia and also holds a Master in Theology and Master of Divinity from Princeton Theological Seminary. Douglas’s wide-ranging interests include: ethics in neo-orthodox theologies, medical and business ethics, the American philosophical tradition of pragmatism, and the role of religion in political philosophy. He is currently researching and writing at the intersection of environmental issues and conflict studies.

Douglas has written two books and contributed chapters to numerous volumes. In his most recent book, Believing Aloud: Reflections on Being Religious in the Public Square, he argues that Christian values of faith, hope, and love matter in the public sphere and that they should shape the public lives of Christian adherents. He is currently working on a book titled War in a Warming World which will theologically reframe pacifism and the just war tradition to address the impact that climate change will likely have throughout the 21st century. 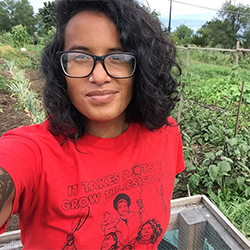 Vivi Moreno is a food justice organizer, and a beginning urban farmer with Catatumbo Cooperative Farm. During the pandemic she helps to coordinate Farm Food Familias, a mutual-aid program delivering 350 weekly meals to covid-affected families living in predominantly Black and Brown neighborhoods in Chicago in collaboration with the Little Village Environmental Justice Organization and Getting Grown Collective. Part of the Farmers for Chicago Program hosted by Urban growers Collective. She’s also one of the founding members of Colectiva Ukulima, a support group of BIPOCTrans*, Gender non-conforming, womxn urban farming businesses in Chicago. Vivi is originally from Maracaibo, Venezuela, and Chicago has been home for over 10 years. She loves working towards food sovereignty, and is interested in learning about localized food systems, birds, bugs, and plants. 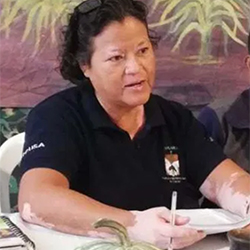 Doris Evangelista is coordinator of Red Uniendo Manos (Joining Hands Network) of El Salvador for eight years, Doris has a Bachelor’s Degree in Social Work and two Master’s Degrees in Education and Local Development. She is a Specialist in Community Development with more than 30 years of experience accompanying vulnerable communities where their human rights have been violated in one way or another. Doris has been training leaders around advocacy issues to strengthen their capacities and their communities to analyze the roots of their problems and seek possible solutions to influence decision makers at the Executive, Legislative and Judicial levels, so that these leaders and trained communities can be protagonists of their own transformation. 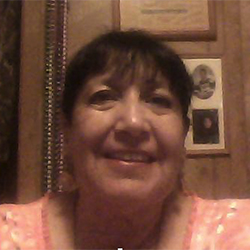 Theresa Dardar is a tribal member and resident of a small American Indian community of Pointe-au-Chien in Lafourche Parish, Louisiana, one of the most fragile coastal areas in the world. She is a strong local leader advocating for the restoration and protection of the ecosystem of the Gulf of Mexico and its coastal areas and the people and communities who call coastal Louisiana home. Theresa serves as a representative and spokesperson for her tribe at local, state, national and international forums, such as the United Nations’ Human Rights of Indigenous Peoples Conference. She has participated in the Intertribal Agricultural Network and has represented the Gulf Coast in various capacities. Theresa works as the Diocesan American Indian liaison at the Catholic Diocese of Houma-Thibodaux Pastoral Center and serves as President of St. Charles the Roch, Kateri Circle, which is a branch of the Tekakwitha Conference. She is a Board Emeritus Member of South Louisiana Wetlands Discovery Center and Go Fish, (a multi-parish alliance of fisher families). Theresa serves as representative for her tribe at the First Peoples’ Conservation Council meetings. She is a member of The Grail, (a women’s movement) supporting the human rights. Theresa has been a participant/leader in Church Women United, an ecumenical women’s movement that fights against racial prejudice. When she does find herself at home, Theresa enjoys cooking special local bayou dishes and being out on the water and shrimping with her husband, Donald.